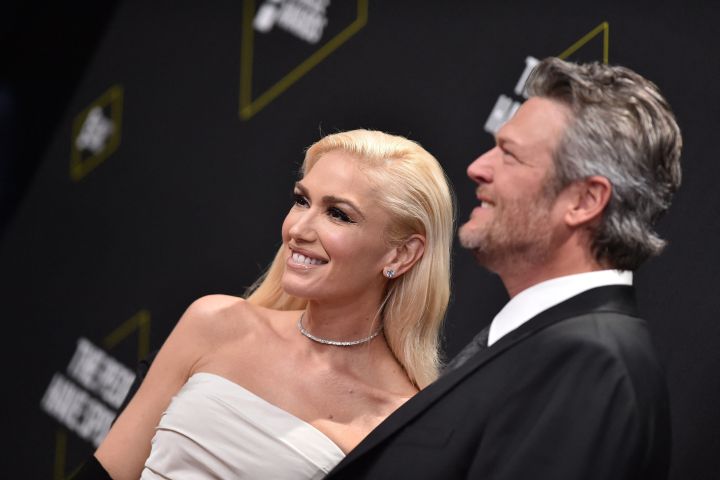 By Meredith B. Kile‍ , ETOnline.com.

The country superstar made a surprising move on Monday’s all-new episode, turning his chair for reggae singer and mother of two Pia Renee. Blake almost went uncontested for the talented performer, until John Legend made a last-second turn as well, and then the (admittedly lopsided) battle was on.

“That was so good,” Blake told Pia. “You were singing fast, I couldn’t even tell what was going on…This might seem like an odd pairing, but I have a lot of experience on this show.”

“I like the idea of this unexpected coach-artist duo,” Nick Jonas admitted, telling Pia, “I think that you’re gonna be a force [on this show].”

After John and Kelly Clarkson had a good laugh quizzing Blake on various reggae artists, the cowboy tried one last-ditch appeal: name-dropping his fiancée, who notably made a reggae album with her band, No Doubt. “Who knows, by the time this airs, Gwen Stefani, she could even be my wife!” he noted.

“Breaking news!” John teased, adding to Pia, “Wouldn’t it be great if she were here to coach you.”

All jokes (and far-fetched falsehoods) aside, Pia decided to “come on home,” joining Team Legend. See the full audition in the video below!

[email protected]’s Blind Audition will leave you on the edge of your seat! ???? #VoiceBlinds #TeamLegend pic.twitter.com/o1jQGbcviP

“America needs to hear someone like you, with so much energy, so much soul,” John told his new team member candidly. “We’re all fortunate that you graced us with your presence.”

“Blake trying to use the reggae/ska card was maybe the saddest display ever,” Kelly jabbed. “We’re still waiting on that reggae hit from Shelton.”

As “The Voice” entered its 20th season, celebrating its 10th anniversary, ET sat down with the coaches, who all noted that there’s still something thrilling about the show’s “captivating” blind audition process that fans love to watch.

“It’s all about the talent and not the aesthetic, right off the bat,” Kelly explained. “It’s a really interesting thing to just hear something and be moved by it and turn around and go, ‘What?!’”In fact, the performer and talk show host shared that the Blinds for season 20 “were my favourite Blinds to shoot. Like, it was so much fun. I literally kept coming home, thinking on my drive home, ‘I can’t believe I get paid to just go and hang out and it’s really fun.’””We’re so fortunate we get to do what we love to do and we’re so fortunate that we have art as such as an outlet for us creatively and emotionally,” John said, also sharing his gratitude for the crew that makes their production a possibility amid the COVID-19 pandemic. “It’s not just a job, because we actually enjoy doing it. It’s fun to be around our coworkers and we get to make music with people who have dreams and are inspired and that’s exciting.””The Voice” airs Mondays at 8 p.m. PT/ET and Tuesdays at 9 p.m. PT/ET on NBC. See more from the upcoming season in the video below!

‘The Voice’ Season 20: Blake Shelton Gets Surprised by an Old Friend!