After a very underwhelming and drama-free hometown episode, I am fully ready for the producers to bust out the big guns in the fantasy suite episode of The Bachelorette. We’ve been teased tears and anxiety, hookups and breakups and now it’s all about to go down.

We start off with Jojo dropping in on Tayshia one last time before her fantasy suite dates. They actually discuss how talking about logistics is so important—where will they live, how important religion is to them, etc—something we rarely see on this show. I hope they bring this sense of vulnerability to Matt’s season of The Bachelor next month.

Going into these dates, I’m really feeling like it could be any of them. Tayshia has said she can picture her life with all three of these guys, but why am I feeling like she hasn’t shown real excitement about one over the other?

Usually, at this point, there is a pretty clear winner. I said this out loud while watching with my fiancé and he asked why the uncertainty wouldn’t make it more exciting. In a game show, sure it’s fun to be surprised by the winner. But when you’re dealing with real emotions and love, it feels odd to be making guesses at this point and not feel more sure of the outcome.

The one guy I could actually tell she was super into? Ben. More on that later.

Ivan gets the first fantasy suite date and it had me thinking, would I rather go first or last? First has the benefit of getting in there before anyone else, if you know what I mean. But then you’re the furthest from their mind when it comes to deciding who gets that rose. In that case, going last actually might be the best. Good thing I’ll never actually have to figure out this conundrum for myself. 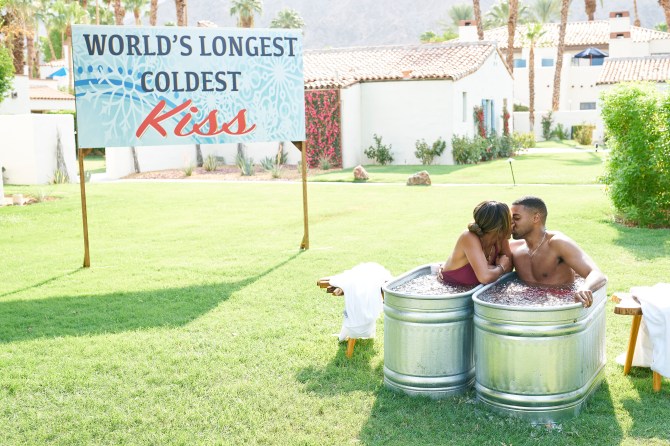 Ivan and Tayshia break the “longest, coldest kiss” record, a date I was at first very weirded out by, then cackling at, and then actually moved when their breathing synced up and I realized I was actually watching a really intimate moment between the two of them.

Tayshia and Ivan tell each other they’re falling in love with each other, and I audibly “aww’ed” when he let out that giggle after she confessed her feelings for him. Ivan seems like a genuinely good person, who won’t be getting that final rose at the end. Poor guy.

The next morning Tayshia reflects on the important conversations she and Ivan stayed up all night having and I get the feeling they did not have sex. Which is obviously fine, but probably won’t help Ivan’s case if she has some mind-blowing sex with the other guys.

Zac’s date card arrives and it says, “let’s explore each other,” which really irks Brendan and I don’t blame him. Zac seems the most f*ckboy-ish, which probably means Tayshia likes him the best. But he also has an intense life story so I think he’s probably a good guy at the end of the day.

Zac and Tayshia paint each other and then roll around in the paint making out. Hot. After their dirrrty date, they sit down to actually talk about life. Zac tells Tayshia he’s realized he wants a family after going through this journey with her. 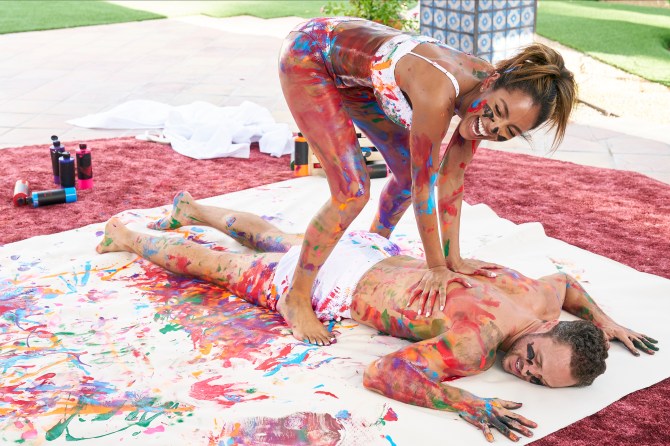 Tayshia pushes him to open up more, when he finally says it: 3 words. 8 letters. And to my genuine shock, Tayshia says “I love you” back! Since when did we throw around, “I love yous” in this show?? Did we learn nothing from Ben’s season? Now I feel like she has to pick him, otherwise, any of these other relationships are doomed.

The next morning, the two of them can’t stop giggling and I am positive they had really good sex. Like *really* good. Sorry, Ivan.

Tayshia and Zac are just two crazy kids in love and it shows. They’re actually pretty cute together, even though he’s my least favorite of the final three. I feel like we finally have a clear front runner and his name is Zac C.

Next up, we have Brendan, the guy the most nervous about proposing, on a date with Neil Lane picking out engagement and wedding rings. This poor guy is clearly BUGGING and doesn’t say a word the entire time. His hands are visibly shaking as he tries on different wedding bands. Ok, this is just mean, producers!

Brendan is so clearly not ready for the next step with Tayshia and lets her know at the dinner portion of the date. I appreciate that he speaks his truth before they take things any further, and clearly, Tayshia does too.

“A younger version of myself would have been really pissed off at you,” she tells Brendan. But she can’t fault him for not being ready and for telling her so before it’s too late. My heart broke for her when she said she really thought she was going to end up with Brendan. TBH, I did too.

And just like that, we’re down to two, or so they want us to believe! In walks Ben wearing a pair of too tight, too short pants ready to tell Tayshia how he feels, something he absolutely should have done a long time ago.

I need to know the quarantine situation here. Did he ever actually leave? Maybe he was quarantined on the other side and they let him back since he hadn’t been exposed to anyone? So. Many. Questions. That will probably never be answered.

He confesses his love for Tayshia and we’re left hanging on her answer… until they show us previews for the next episode and he is clearly still in the running.

I’m leaning towards Zac as the winner here, but I don’t want to call it yet, Thankfully, I only have to wait 24 hours to find out whose proposal Tayshia accepts at the end of this (month-long, yikes) journey.