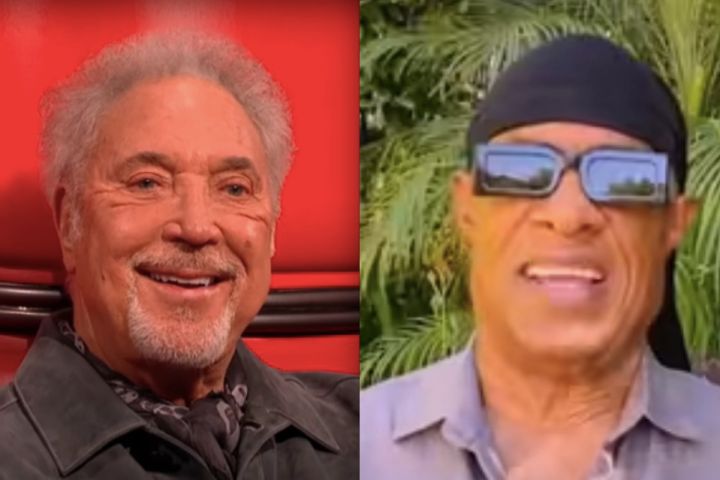 Sir Tom Jones received a sweet surprise from a longtime friend while appearing on “The Voice UK”.

During the show’s blind audition rounds, coach will.i.am asks Sir Tom to single out some of the singers that he’s admired over the course of his career, leading the Black Eyed Peas founder to ask whether Jones had ever worked with Stevie Wonder.

“Yeah, yeah, he was on my TV show,” Jones replied. “He’s a great musician. We became friends, and he’s a wonderful person.”

That exchange was followed by will.i.am calling for something to be pulled up on the big screen, revealing Wonder playing harmonica.

“No way!” exclaimed coach Olly Murs. “This is crazy. Stevie Wonder’s on ‘The Voice’.”

“I gotta get this right, because it’s for Sir Tom Jones,” said Wonder, affecting a British accent, as Jones smiled from ear to ear.

“I feel so happy to congratulate you as you celebrate 80 years on this planet,” Wonder continued before breaking into an a capella rendition of Jones’ iconic hit “It’s Not Unusual”.

“I had the pleasure of not just meeting that person who sang that song but meeting a new friend. And I know that that friendship will last for a lifetime,” said Wonder to Jones, who celebrated his 80th birthday back in June.

“So many wonderful moments we’ve shared. I still remember when we did your show and I was telling you the words to ‘Uptight’, you were telling me the words to ‘It’s Not Unusual’. I played drums and it was just a wonderful thing,” Wonder added.

“I love you with my whole heart and I want you to promise me that you will do your best to give us another 80 years,” he concluded as Jones wiped tears from his eyes.

Jones took to Twitter to thank his “dear friend,” admitting “that meant a lot to me.”

Thank you my dear friend @StevieWonder that meant a lot to me. Here’s to performing with you again soon! ???? #thevoiceuk pic.twitter.com/qW2CO64JsL

Meanwhile, for old time’s sake, check out Wonder’s appearance on “This Is Tom Jones” back in 1969.