Former first lady Michelle Obama was radiant at the inauguration today and only “Extra’s” Cheslie Kryst got a chance to speak with the designer who created her outfit. He also designed the heels worn by Vice President Kamala Harris, and her evening look.

Sergio was tight-lipped on what we will see the VP wearing tonight, only saying, “It’s beautiful.”

As for Michelle’s plum-colored wide-legged suit, complete with a floor-length coat and black face mask, the Black designer from South Carolina “designed her entire look, the coat, the sweater, the pants, belt.”

Cheslie asked, “What did your mom say when you told her you were dressing Michelle Obama and VP Kamala Harris?” He answered, “She said it was what I was here to do. It was my destiny. She was so surprised, but today she got emotional and my dad got emotional. They’re my biggest supporters.” 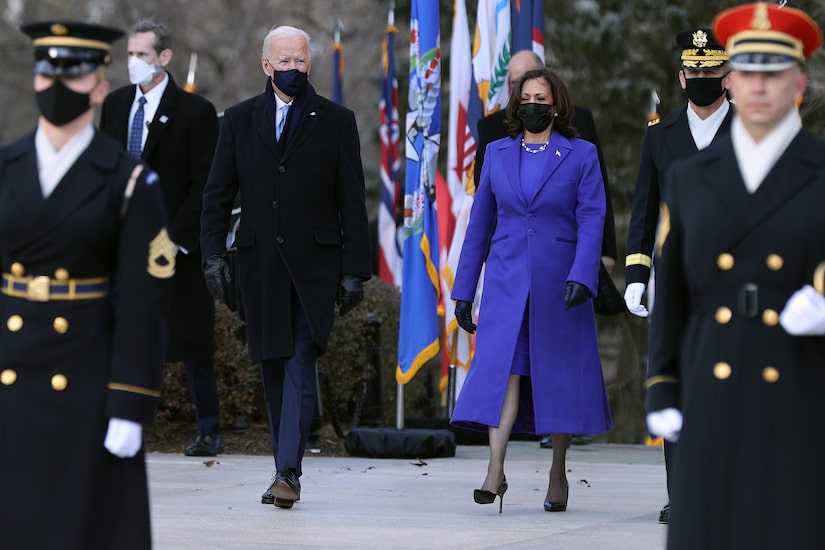 This isn’t the first time he has dressed Washington, D.C.’s royalty. “It’s always great to dress Michelle Obama… This is the third time now… Her style is amazing.”

Hudson also dressed her for her book tour, saying, “The Atlanta stop on her tour — it was like an eggplant-color suit… and then we did her for Essence Fest in the… blue sequin jumpsuit.”

So, does he have more looks for her and the VP planned? “Oh, if I did, I couldn’t tell you.”

He has dressed plenty of stars in Hollywood, including Beyoncé, Tiffany Haddish, and Demi Lovato, as well as Issa Rae at the Emmys and Amy Poehler at the Golden Globes.

Cheslie wanted to know, “Do you know of any other celebrities wearing your pieces this year?”

Sergio answered, “We have some things coming up — I will say that — so keep your eyes open… I’ve dressed so many celebrities; my next thing is I really want to dress someone for the Academy Awards… That’s my next goal.”

Hudson also understands the importance of representation for Black designers, saying, “I think it’s very important… when you have the platform to help a young and upcoming designer. We don’t get these kind of opportunities every day… so we applaud these women’s teams for thinking about helping.”

Sergio is helping break down the trends for 2021, saying, “I think people are itching for fashion now… I think it’s going to be a renaissance of dressing. That’s my personal opinion, and I hope and pray that women are going to want to dress up and wear luxurious fabrics… I think we will see a switch where it’s like, ‘OK, let’s get dressed.’”