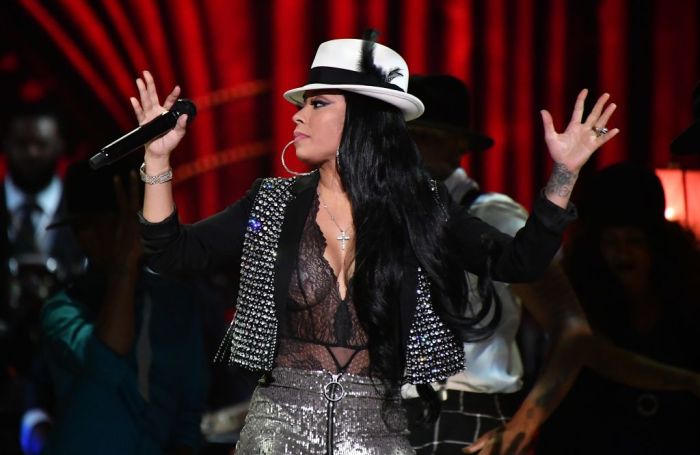 On Saturday the singer went on Instagram Live to address her lateness to the Thursday night battle. Cole’s match against Ashanti was initially pushed back after Ashanti tested positive for COVID-19, then rescheduled again after cases spiked and the organizers decided to go back to remote battles. The battle moved forward on January 21st — but for a long time (over an hour) it seemed as if only Ashanti was going to show up. Keyshia brought longtime friend and collaborator Elijah Blake onto her live to talk about her tardiness. She also revealed that she had been ready to start the battle — but the audio and visuals weren’t right.

“I want to apologize for not sitting my a** in that seat. OK? Because I was there and I should’ve sat down. I should’ve just sat in the seat no matter if I felt like the visual wasn’t clear… they said my music wasn’t gonna be right or whatever it was.”

She added: “I think, more so than anything, people wanted me to sit, be present…even though they didn’t know that I was present.”

Cole also offered a shout out to OT Genasis, who she says recognized the wireless connection at the studio needed to be fixed as she was finishing getting ready:

“When I was literally in the back and putting on my last touches, and I’m looking at the video from back in my dressing room… and I said ‘Why does my picture look so dark?’ Soon as that happened, OT came back and said, ‘You know they gotta fix the internet connection because you are going to be experiencing another situation, you know like Teddy Riley…’ You know the picture wasn’t clear, the visual wasn’t clear, the sound wasn’t good. I was really skeptical about that. I was just like, I don’t want to go on and they not see me, and I’m looking blurry, the connection wasn’t right. I said ‘You need to fix that first and then I’ll come out.

Cole’s explanations echo her DJ GoDJ Hi-C who was interviewed by Houston’s 97.9 The Box Friday.

His full interview is below:

Cole also explained her apparent “attitude” when she first came out saying she “wears her heart on her sleeve” and that she was upset about her lateness and was also extremely nervous. In her conversation with Elijah Blake she also revealed she’s been nervous with every single performance she’s had.

Do you think Keyshia should have come out before her audio/visuals were fixed? Or did she do the right thing?