COVID-19 has put a hold on several major events and life celebrations – including Jennifer Lopez’s wedding to Alex Rodriguez.

The two were slated to tie the knot in Italy over the summer but had to press pause because of the international pandemic. Now, Jennifer Lopez has said she’s not sure if they’ll get married at all.

She told Andy Cohen on his SiriusXM show Radio Andy:

“Oh yeah we’ve talked about that for sure. I mean at our age, we’ve both been married before, it’s like, do we get married? Do we not? What does it mean for us? And it’s just, it comes down to like personal, like, what do you want to do? There’s definitely no rush though.”

“It was really sad because we were supposed to get married in June and we had planned at all. So in March or April, we’re looking down the pipe and we’re going, ‘This is maybe not going to happen.’ Italy’s the worst place in the world. And we were going to get married in Italy. It was, yeah, it was like, I was like, ‘okay, we got to cancel everything.’ And we just started kind of like, and we had to put out all this money and all this stuff, we were like, we gotta cancel it. So we, we canceled it.”

She said they went back to the drawing board months later, but still found that it wasn’t the right time. She referenced actress Goldie Hawn and actor Kurt Russell, who have been together since 1983 but never got married.

“You just think to yourself, ‘Well, things will happen in their divine time in a way.’ But the same thing with like the Goldie thing and Kurt, you think, ‘Do you have to, should we?’ It just kind of gave us a moment to pause and think about it.”

Alex Rodriguez proposed to Jennifer Lopez last March. They went public with their relationship in 2017. 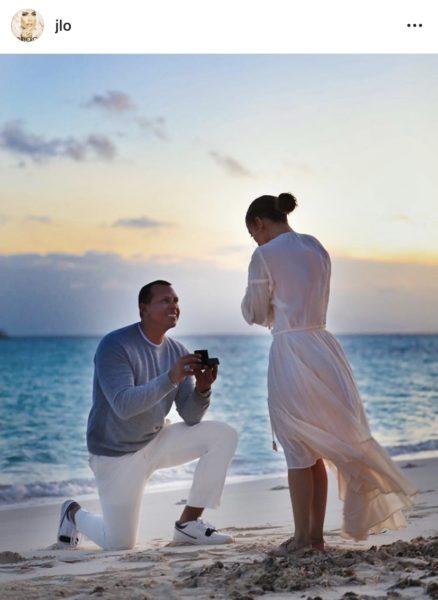 What are your thoughts on J. Lo and A.Rod possibly not getting married? Comment and let us know.