Favorite Thing About Joining Y&R In 1994? “I tell you, I was so broke before I got this job. Before that, I had done a million odd jobs: I sold vegetable choppers, perfume in department stores and Rollerblades at swap meets. In fact, I kept that job even after I got Y&R because I didn’t to go. Getting that job, and them wanting me for a contract, changed my life. I remember going to the grocery store knowing I don’t have only $20 to spend and having the freedom to buy anything I wanted. Instead of generic peanut butter, I bought Jif!”

Favorite Storyline: “I’ve been asked this before and I always say Nick and Phyllis getting together but then people think that’s the only storyline I like and there were so many. The ones that stand out are the Phyllis/Jack/Diane triangle. That one went on for a couple of years and I love Susan Walters [ex-Diane]. I think she was so good and Diane was a real match for Phyllis, and Peter Bergman [Jack] is always perfection. However, it was a hard storyline to play after a while because Diane was always getting the better of Phyllis and there was a lot of frustration because I was going to work every day playing that. Sometimes that’s tough when you don’t have a reprieve from something like that. That went on again when Nick was breaking up with Phyllis because he had an affair again with Sharon. In a year he broke up with Phyllis five different times. Maria [Bell, then-head writer] said, ‘We love how upset Phyllis gets, so we love to write it.’ I was going to work feeling like an open wound and that was tough. Also the Dr. Tim stuff. I love when Phyllis tried to bribe him in court. Those are the ones that stand out in my mind. I also had some great stuff with Damon Porter. There were some shining moments in that, too. Keith [Hamilton Cobb, ex-Damon] is such a phenomenal actor. He’s doing quite well as a writer now.” 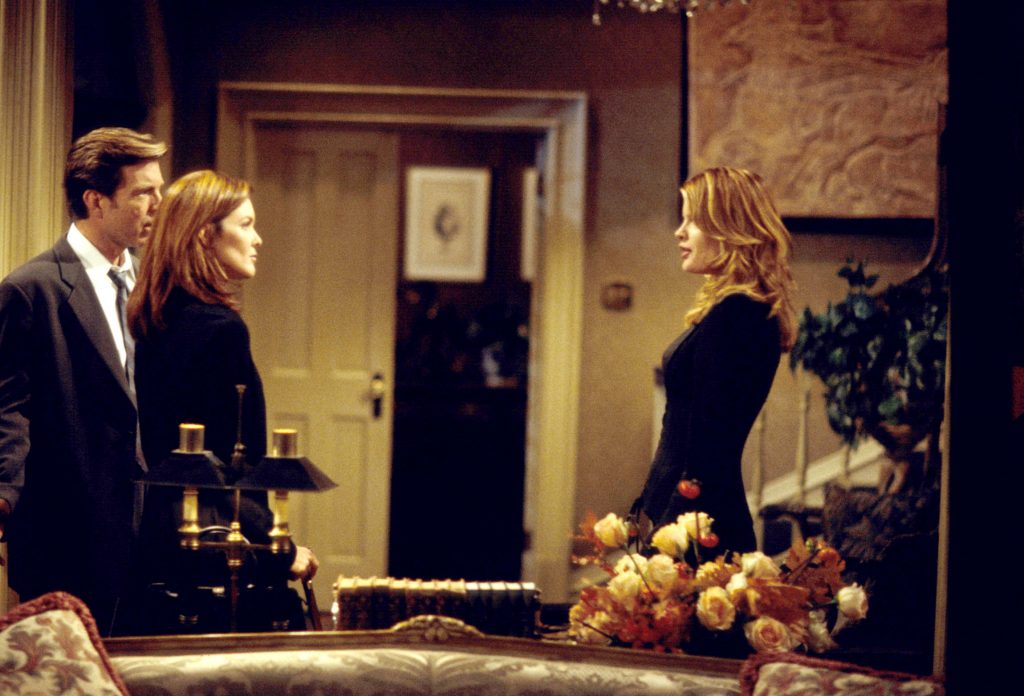 Favorite Line Of Dialogue? “It was when Phyllis was suspected of starting the fire that almost killed Diane, and Phyllis said to Michael something like, ‘If I had really started the fire, that bitch would’ve been burned to a crisp!’ ”

Favorite Scene? “There are so many, but the scene with Nick and Phyllis before they do it is one because I was legit nervous. I was freaked out and so was Josh [Morrow, Nick]. Before they put our characters together, he was my homie, like my brother and now we were going to be sucking face. But it worked in our favor. And there was a scene I had with Peter Bergman, where we were at a bar and our characters were talking about their relationship. There was also a scene when Danny came back in town and Phyllis was trying to sell herself as a changed person to him. It was beautiful because you’re just in pain for this woman. It was really heartbreaking. I love scenes that are insane and crazy, but I also like simple scenes because I feel like you can fill them with real emotions.”

Favorite Enemy? “I like all the rivalries I’ve had because they’re a different harmonic from each other. I like what Christine brings out in Phyllis. I really do. I think Phyllis truly despises Christine. She doesn’t hate Sharon, or hate Dru or hate Victoria or Abby, but she hates Christine. I think Phyllis blames her entire downfall in the beginning of her life on Christine. Phyllis’s plan was to be the rock star’s wife and it didn’t work out that way because Christine stopped that from happening, and since then, Phyllis hasn’t been able to get it together, so she blames Christine for all of it.” 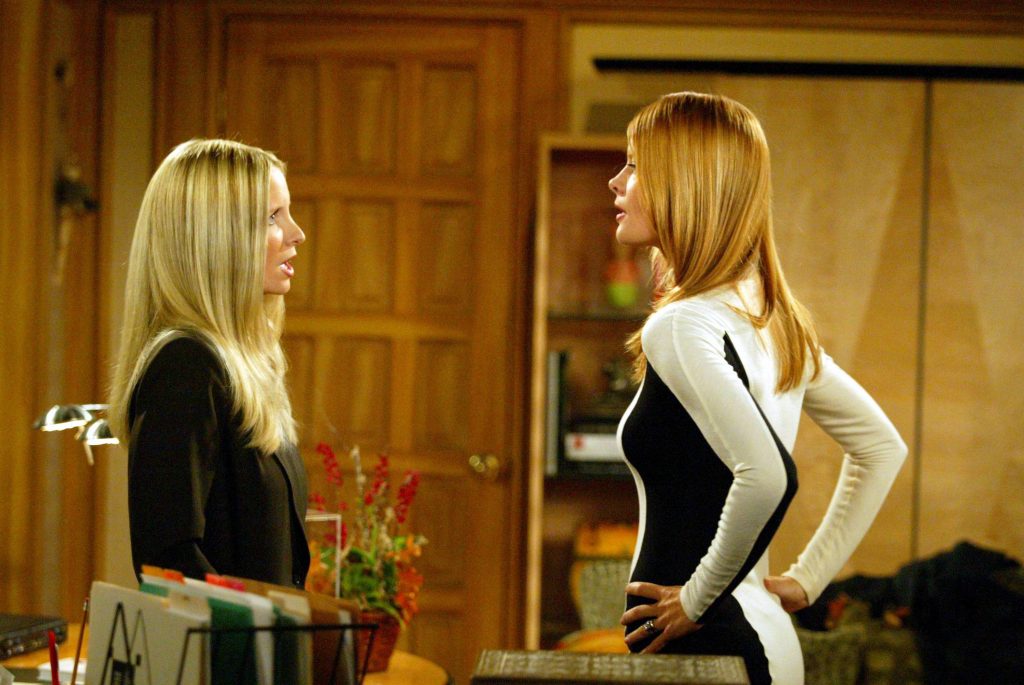 Favorite Thing About Playing Phyllis? “That she’s so complex and there’s this huge range to play with her. I think the one writer who wrote Phyllis differently than the rest was Lynn Latham. I remember this one scene where Nick and Phyllis are in the kitchen cooking and I was like, ‘Whoa, really?’ It’s not a criticism of the writer at all, it was just me going, ‘Wow, this is a change.’ Phyllis was defanged for a little bit but that’s okay because you’re doing other things.”

Favorite Thing About Working With Hunter King (Summer)? “I love Hunter. She’s so professional and she’s really good. The way that Summer is written reminds me of my own daughter in 10 years. The conversations that Phyllis and Summer have are oddly familiar to me. There was a scene where Summer says, ‘You were right, Mom’ and I asked if I could please say [as Phyllis], ‘I was what?’ because that’s real and they said, ‘Sure.’ I feel like it’s an authentic daughter/mother relationship and Hunter is amazing.”

Favorite Thing About Working With Peter Bergman? “He’s so kind and good and he really cares about you in a scene. He’s so giving and just wants to honor the history of the characters. I respect Peter tremendously and how he lives his life. He’s a team player because to him, it’s all about the story. Also, if I have some issue at work, I can always call Peter and be like, ‘Is this my imagination …?’ And he’ll say, ‘No, you’re right,’ or ‘That’s not right.’ ”

Favorite Thing About Playing A Mother? “I think anytime you play a parent, it gives your character more heart. That’s happened with Phyllis and I love that.”

Favorite Thing About Working With Joshua Morrow? “That he’s completely normal. What you see is what you get. He’s truly an Oklahoma boy and I mean that in the greatest way. There’s no hidden agenda with him and he doesn’t play bullsh**t actor games. He’s there in every scene and when you throw a curveball, he’s always there to catch it. I really love that about him. He’s so down-to-earth.”

Favorite Thing About Working With Sharon Case (Sharon)? “Sharon and I go way back even before the show. She can be quirky and goofy more than people know. She’s very funny. If there’s an element of comedy in a scene, she’ll jump on it and be funny. She could easily do comedy. She has a viewpoint about her character and she will stay true to what the Sharon character is and that can be fun to play with. And that works well. I love to work with her because we both have definite viewpoints of our characters and we don’t sway from that. Even when they don’t give us anything, we can still play the history of these two women, who have been in love with the same man forever.” 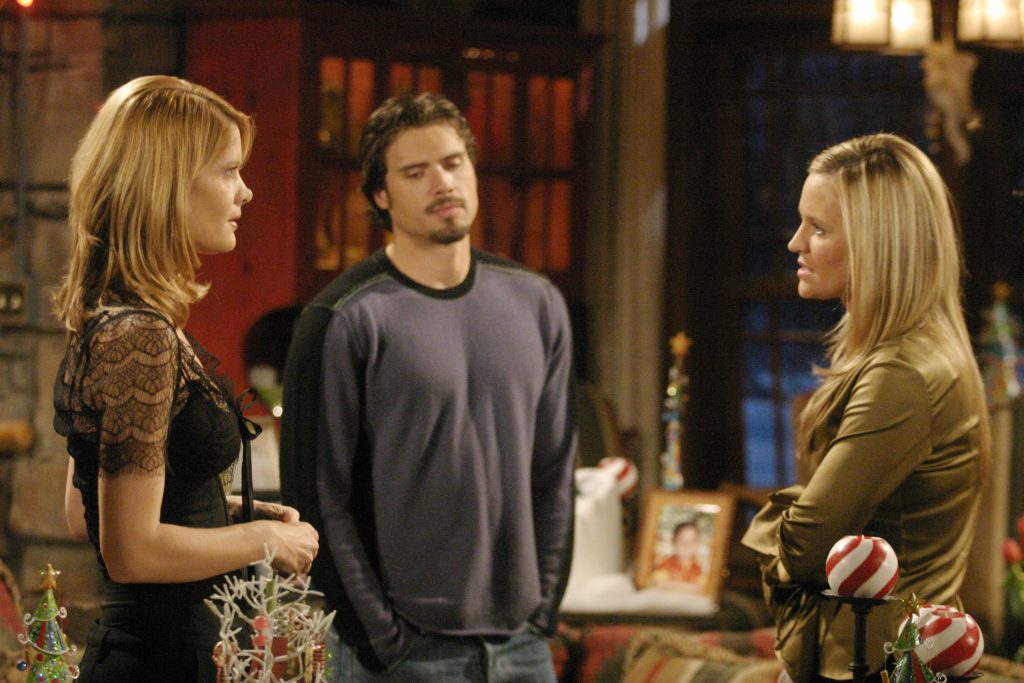 Favorite Past Scene Partner? “Let’s bring the Graz [Michael Graziadei, ex-Daniel] back! I love my Graz. I just love, love, love Phyllis and her son together. Jeff Branson [ex-Ronan] is a really great actor, so I would love him to come back, too. He needs to come back.” 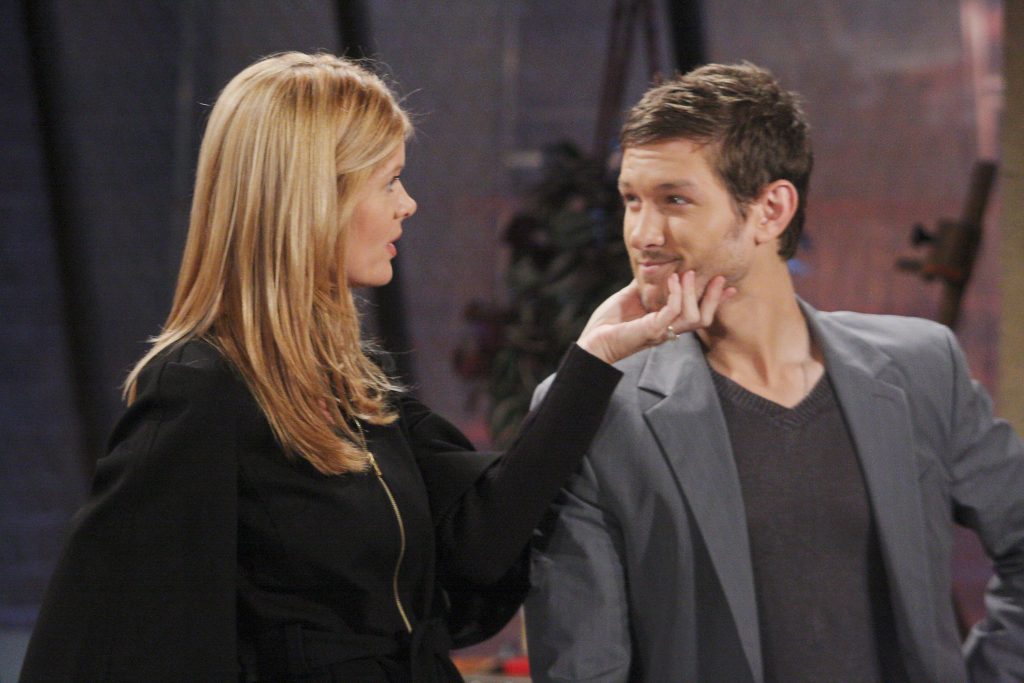 Was There Ever A Favorite Thing About Playing A Grandmother? “[Laughs] There was! There actually was. They wrote it that Phyllis had no problem with being a grandmother and I was like, ‘What? Wait. She would have a huge problem with that!’ I had a scene with Christian [J. LeBlanc, Michael] and we made it that Phyllis couldn’t even say ‘grandmother’, because she was so disturbed by that word. I just thought that Phyllis would be too vain about being a grandmother, right? I love that I was able to put in there that she did have a problem with it. That was fun. If they really hated me, they could bring back [her granddaughter] Lucy as a teenager. I remember I was tweaking when they brought back Daniel as a teenager, but you know, I don’t care about that anymore.”

Favorite Memory Of Winning Your First Daytime Emmy In 1997 For Outstanding Supporting Actress? “I was totally shocked. I was never anyone’s prediction to win. I was last. I thought people wouldn’t vote for me because I wasn’t on the show anymore. I remember being at the [Emmy] dinner and not feeling I was fitting in. They didn’t put me at the Y&R table, I was put at a table way in the corner with people from a children’s show. I remember feeling bummed out, so I was truly stunned. I heard my name and I was like, ‘What? What?’ ”

Favorite Set? “I love the Grand Phoenix because we all look great. I like Society, too. Really, any set that I look pretty in is my favorite.”

Favorite Job For Phyllis? “When she worked at Newman, then at Jabot then back to Newman, around 2001. She was really hopscotching and it was fun.”

Favorite Memory Of Winning Your Daytime Emmy In 2004 For Outstanding Lead Actress? “My boyfriend at the time flew into New York for the show and I had brought my entire family in. I got this suite at The Ritz and just wanted all of us to have a good time. My boyfriend’s plane was late and from the car he was barking orders and I was like, ‘Screw you.’ I was supposed to have his suit ready for him but the doormen at The Ritz wear top hats, with striped pants and the long coattails, so as a joke, I got one of the doormen’s suits. When my boyfriend arrived at the hotel and held up the suit, he said, ‘My God, are you serious?’ I started to laugh, but I didn’t want to ruin the joke so I turned it into crying and he was like, ‘It’s okay, don’t worry. I can wear it.’ He was actually going to put it on and then I couldn’t stop laughing. I really liked what I later said in my acceptance speech that night because it would still work today with the bullying problem. I said, ‘I accept this in honor of all those kids who are outsiders and don’t fit in.’ ”

Favorite Offbeat Or Comical Episode? “There was always this comedic flair with Phyllis from the beginning and I loved the stuff with Dr. Tim. Also, the chocolate fountain fight with Sharon. I tell you, that chocolate was waxy. Sharon was wearing high-heel boots and slipped and I remember thinking, ‘Now I’ve gotta go down, too.’ So I fell down and we were rolling around in it, but anything in chocolate is great.”

Favorite Part About Being On Y&R? “I’m shocked that I’m still on. It’s so weird to me. Y&R is such a legacy. It was created by a genius storyteller [William J. Bell]. Phyllis was supposed to come in and run over Christine, then be out, but it turned in to this kind of role. That was just yesterday to me.”

Favorite Best Friend For Phyllis? “She and Lauren were super-homies, but I think her No. 1 friend will always be Michael. Always. I love working with Christian. He’s a phenomenal actor and he can do anything. He’s so in-depth. As a friend, I can tell him any story, and he gets it. Phyllis just isn’t a woman’s woman, but she does have a nice friendship with Amanda that I like.” 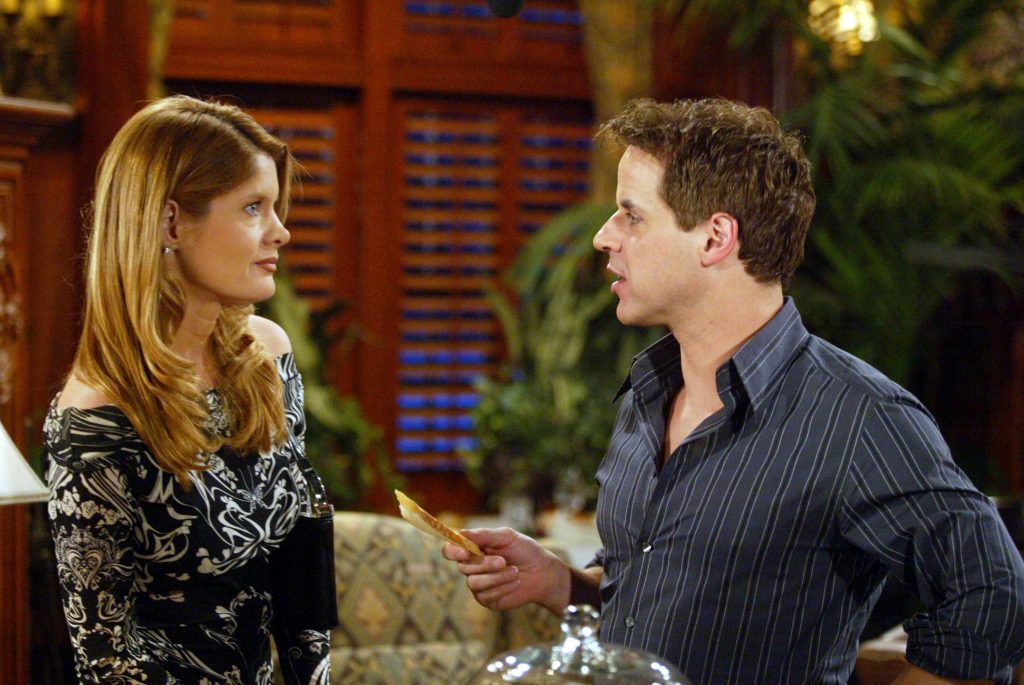